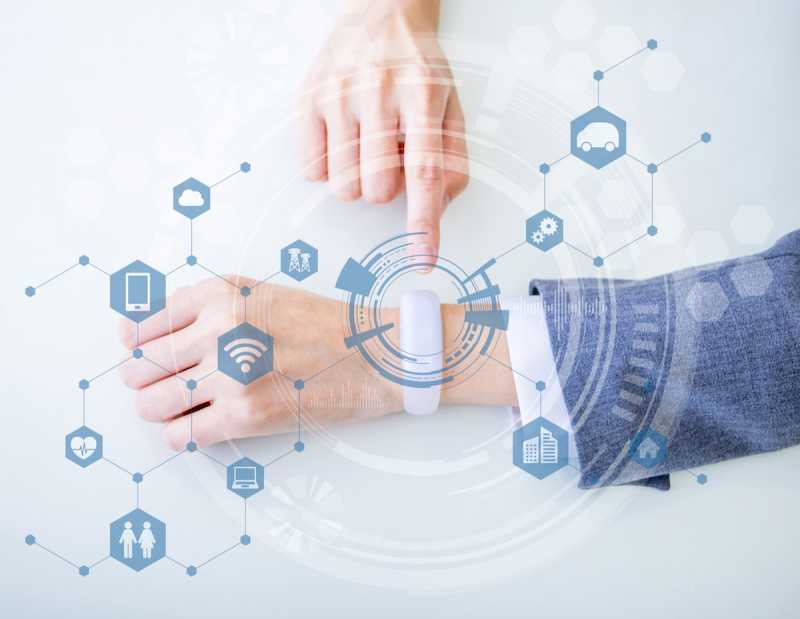 You’ve probably heard so much about the recently released Bluetooth 5.

There was so much media hype surrounding the release of Bluetooth 5, and lots of conflicting information with very few details. Many media articles made it sound like you can achieve all these simultaneously!

In this first post of a series on Bluetooth 5, I’ll go ahead and demystify all these facts for you as well as cover Bluetooth 5 Advertisements in detail.

The goal with this series of blog posts is:

First, let’s make it clear that Bluetooth 5 does not achieve both increased range and speed simultaneously – in fact, you will absolutely sacrifice speed in favor of range and vice versa!

A few things to note:

An optional symbol rate of 2 Msym/s may be supported, with a bit rate of 2 Mb/s, which is referred to as the LE 2M PHY.

PHY is the term used to refer to the Physical Layer of Bluetooth technology. For more info on the term, refer to the Wikipedia article on PHY.

So, let’s take a look at what’s new with Bluetooth 5.0 (compared to 4.2 and earlier versions). Several new features are introduced in the Bluetooth Core Specification 5.0 Release (compared to version 4.2):

We will start by talking briefly about the new higher speed 2 Msym/s PHY and the Long Range feature (utilizing the Coded PHY). After that, we will go deep into Bluetooth 5 Advertisements in general as well the new LE Advertising Extensions feature. In upcoming posts, we’ll go over each of the longer range and higher speed features in more detail.

We will also go over how to implement Extended Advertisements on the nRF52840 Preview Development Kit and provide the complete source code. Since these are new Bluetooth 5 features, an app such as nRF Connect or any other smartphone app that’s running on a non-Bluetooth 5 supported device won’t be able to discover the advertisements. This is why we will be using the new Bluetooth Tracker by Ellisys. The Tracker is one of the best commercial sniffers out there (if not the best) because of its form factor, competitive price and elegant software UI design compared to others out there, and best of all it fully supports Bluetooth 5.

Bonus: Download my free report on the 5 Essential Bluetooth Low Energy Tools which help you develop for BLE in the most efficient manner.

How Bluetooth 5 increases speed to 2x and range to 4x

With the addition of the new 2 Msym/second PHY, Bluetooth 5 can now transfer data at 2x the rate of the original 1 Msym/s PHY. There are three PHYs in Bluetooth 5:

This following figure from the official spec better explains this:

There are certainly trade-offs for choosing one of these PHYs over the other (there are also restrictions on where each can be used). In addition to the increased speed, the new 2M PHY also reduces power consumption since the same amount of data is transmitted in less time reducing the radio-on time. Coexistence is also improved because of the less radio-on time.

The benefit of using the LE Coded PHY is increased range with the trade-off of both higher power consumption and reduced speed (down to 125kbps or 500 kbps depending on the coding used S=2 vs. S=8).

Here are a few videos showing both the longer range and higher speed features of Bluetooth 5 by Nordic Semiconductor and Texas Instruments:

Advertisements always start with advertisement packets sent on the 3 primary channels (or a subset of these channels). Extra information can then be offloaded to the Secondary advertisement channels to allow for more data to be broadcast. There’s also an additional mode called Periodic Advertisement that allows a scanner or observer to be synchronized with the advertisements sent continuously by the broadcaster.

The two main categories of advertisements are:

To better understand the different advertising PDUs and which PHY is allowed for each, we refer to the spec (Volume 6, Part B, Section 2.3): 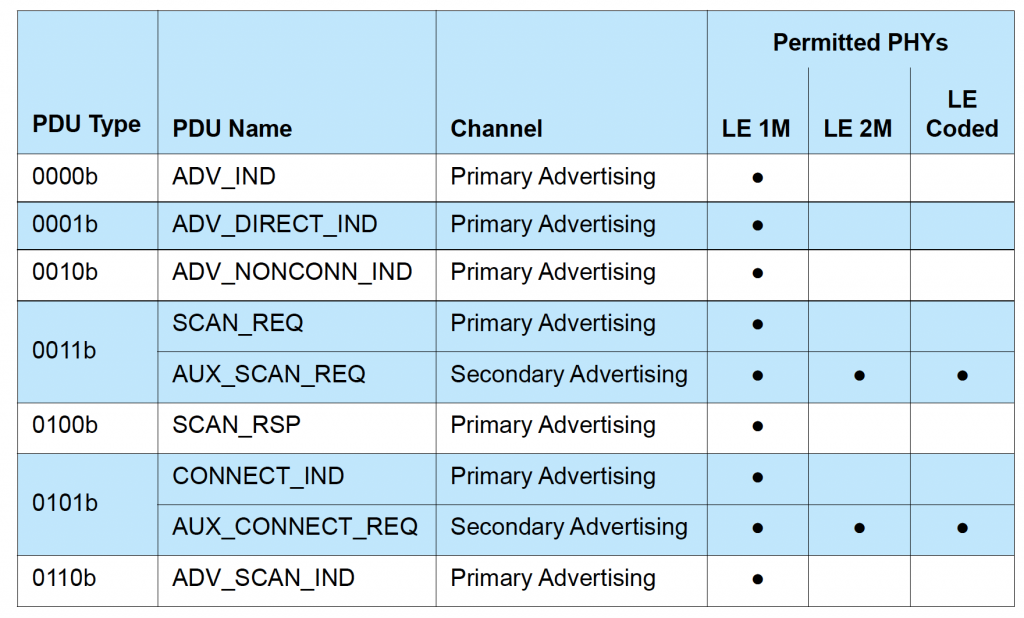 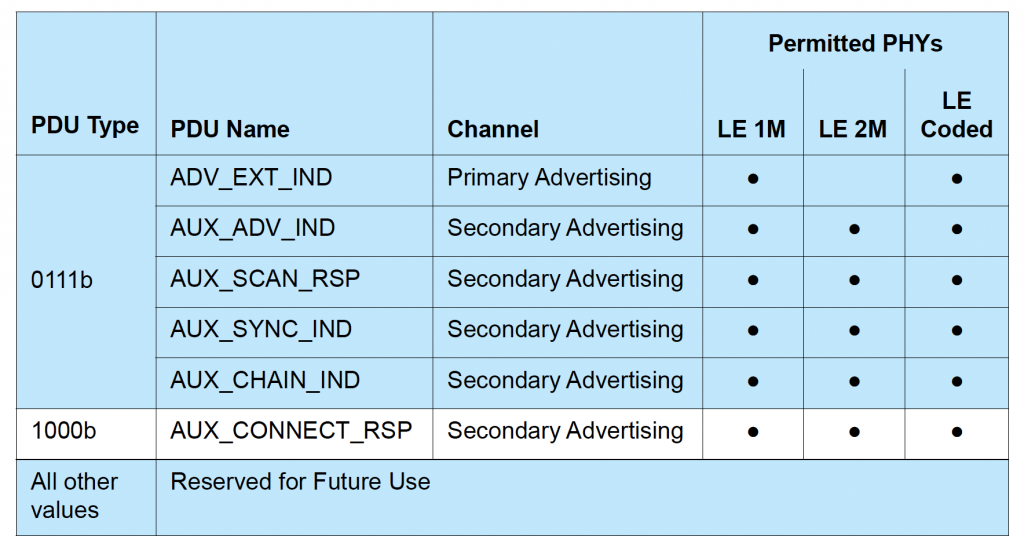 This table lays out the PHYs can be used for each of the Advertising PDU Types. You will notice that all the legacy advertisement PDUs we listed can only be sent on the original LE 1M PHY, and that the only Primary Advertisement PDU that can be sent on anything other than the 1M PHY is the ADV_EXT_IND (which is the only case where one of the new PHYs can be used on the primary advertising channels). All others are Secondary Advertising packets and can be sent on any of the three PHYs.

To better understand where each of these PDU types is used, let’s look at another table from the Bluetooth 5.0 Spec (Volume 6, Part B, Section 4.4.2, Table 4.1): 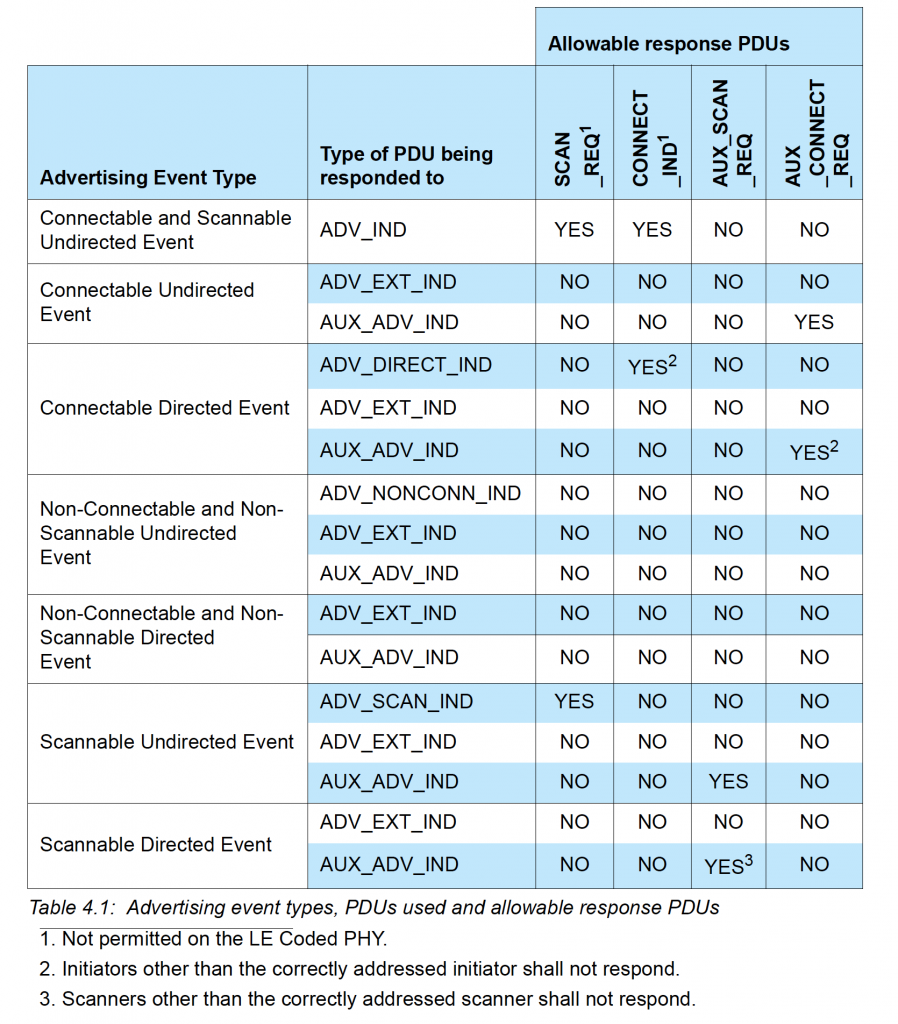 You’ll notice that the only Advertising Event that does not allow ADV_EXT_IND is the Connectable and Scannable Undirected Event. For this advertising event type, ADV_INT is the only type allowed.

A few notes about the two types of advertising channels:

Extended Advertisements are a way to advertise more (offloaded) data than what’s allowed with Legacy Advertisements. Offloading is accomplished by first advertising on the primary channel that points to an auxiliary packet on the secondary channel.

When advertising on the LE Uncoded 1M PHY:

When advertising on the LE Coded PHY:

As you can see from the figure above, the primary advertisement channel is used to transmit the ADV_EXT_IND PDU type which holds information (Time offset, PHY…etc) that can be used to find the AUX_ADV_IND PDU packet. That packet, in turn, contains the SyncInfo field which defines the data needed to synchronize to the periodic advertisement packets (AUX_SYNC_IND and AUX_CHAIN_IND) in a way similar to how connections are formed (channel map, hop sequence, which PHY…etc).

We will go through an example of implementing Bluetooth 5 Extended Advertisements using the nRF52840 Preview Development Kit and show the packets as captured by the Ellisys Bluetooth Tracker sniffer.

This example will be based on the nRF52840 Preview Development Kit (PDK) by Nordic Semiconductor. If you haven’t set up your development environment for this development kit, then follow my Complete nRF52 Mac Development Tutorial. In this example, however, I’ll be using the experimental Blinky peripheral app example provided by the nRF SDK.

In order to implement Bluetooth 5 features on the nRF52840 PDK, you will need to do the following:

Let’s go over each step in detail.

Steps 1-4: Update the SDK and the SoftDevice

I recommend you make a copy of the SDK and make this change in the copy so you don’t end up breaking other applications you’ve developed that rely on older SoftDevice releases. In my case, I started with the example app labeled “experimental_ble_app_blinky” under the examples/ble_peripheral folder of the nRF5 SDK.

Download the latest SoftDevice version 5.0.0-3.alpha or greater available here. You can follow the migration document that’s included in the release to update your application to use the new SoftDevice release. Here are the steps to take:

Follow my tutorial on Setting up your Mac Development environment for nRF52.

Step 8: Use a sniffer or another Bluetooth 5 device to capture advertisements

Here’s a video tutorial showing the different advertisement settings and how they appear when captured by the Ellisys Tracker.

From the Ellisys Tracker sniffer capture: 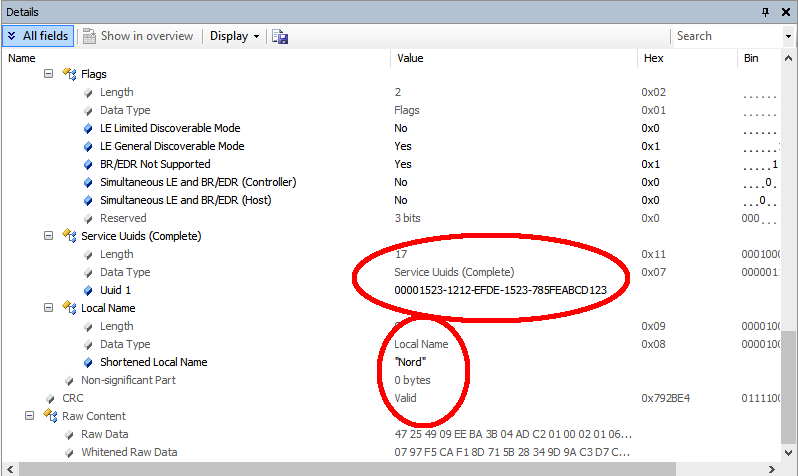 Unfortunately, the nRF5x SDK and SoftDevice (as of July 2017) does not yet support advertisement packets to contain data larger than 31 bytes, so the name here is cut off, even though we specified it as a Complete Local Name instead of a Shortened Local Name (the API shortened it for us).

How and when can you utilize Bluetooth 5 Advertisements?

No doubt that Beacon applications will benefit the most from extended advertisements. However, it will take time before you can practically utilize this feature since it will depend on the scanning devices (smartphones, tablets, PCs) supporting Bluetooth 5 Extended Advertisements.

Beacons can now broadcast more data and allow for a better user experience. Connectable devices can also utilize this to send more data and allow connections on the secondary advertising channels (which can help avoid interference and noise from other devices broadcasting on the primary channels).

Extended Advertisements (including periodic advertisements) is just one of the exciting and promising features of the new Bluetooth 5. We will go into more detail on the other two features of Bluetooth 5: longer range, and higher speed in the upcoming posts.

To summarize what we covered today: