Bluetooth has been around for a while. In fact, it recently celebrated its 20th year anniversary!

The introduction of the Bluetooth Low Energy (BLE) standard came in 2010 to address the rapid growth of use cases in the Internet of Things (IoT) field including sensors, wearables, medical devices, etc. However, one thing that BLE lacked since the beginning was the capability of supporting a many-to-many topology (often referred to as mesh), where multiple BLE devices can send each other messages and relay messages to other devices within a network.

But first, a few important notes regarding Bluetooth mesh:

What is Bluetooth Mesh?

The Bluetooth mesh specification was released in July of 2017 with the goal of increasing the range of Bluetooth networks and adding support for more industrial applications that utilize BLE.

With Bluetooth mesh, a new topology is introduced for BLE. Devices can now operate in a many-to-many topology, or what’s called mesh, where devices can set up connections with multiple other devices within the network.

From Wikipedia’s page on mesh networking:

A mesh network is a local network topology in which the infrastructure nodes (i.e. bridges, switches and other infrastructure devices) connect directly, dynamically and non-hierarchically to as many other nodes as possible and cooperate with one another to efficiently route data from/to clients. This lack of dependency on one node allows for every node to participate in the relay of information. Mesh networks dynamically self-organize and self-configure, which can reduce installation overhead. The ability to self-configure enables dynamic distribution of workloads, particularly in the event that a few nodes should fail. This in turn contributes to fault-tolerance and reduced maintenance costs.

There are two main benefits of a mesh network:

Comparison With Other Wireless Mesh Networks

There are a few differences between the Bluetooth mesh protocol and other mesh networks out there (including Thread, Zigbee, and Z-Wave). Some of the important ones are:

Let’s go over some of the most important concepts within Bluetooth mesh.

There are many concepts that we need to cover to better understand the way Bluetooth mesh operates. We’ll cover all of them starting with this post, and continuing in the upcoming posts within this series.

Figure 3: Elements within a node

Elements can be in various conditions, represented by state values. For example, on and off are states of a lightbulb within a light fixture. A change from one state to another is called a state transition. This can be instantaneous, or it can occur over time, after what’s called a transition period. When a state change occurs, it is likely to cause a change in the behavior of an element.

Some states may be bound to each other, meaning that a change in one state triggers a change in the other. There may be two or more states bound to each other. Let’s take for example a light dimmer: it will likely have a level state as well as an on/off state. If the level state value changes to zero, it will trigger the on/off state to transition to off. If the level value changes from zero to a non-zero value, then that triggers the on/off state to transition to on.

Properties add some context to a state value. For example, defining that a temperature value is an outdoor or indoor temperature. There are two types of properties:

In Bluetooth mesh, all communications within the network are message-oriented, and nodes send messages to control or relay information to each other. Messages are the mechanism by which operations on nodes are invoked. If a node needs to report its status, it also sends it via a message. A given message type represents an operation on a state or collection of multiple state values.

There are three types of messages in Bluetooth mesh, each of which is defined by a unique opcode (operation code):

Messages in a Bluetooth mesh network must be sent to and from an address. There are three types of addresses:

In software architecture, publish–subscribe is a messaging pattern where senders of messages, called publishers, do not program the messages to be sent directly to specific receivers, called subscribers, but instead categorize published messages into classes without knowledge of which subscribers, if any, there may be. Similarly, subscribers express interest in one or more classes and only receive messages that are of interest, without knowledge of which publishers, if any, there are.

Publishing is the act of sending a message. Subscribing is a configuration used to allow select messages to be sent to specific addresses for processing. Typically, messages are addressed to groupor virtual addresses.

Here’s an example of a mesh network in a home that’s comprised of 6 light switches and 9 light bulbs. The network utilizes the publish-subscribe method to allow nodes to send messages to each other. 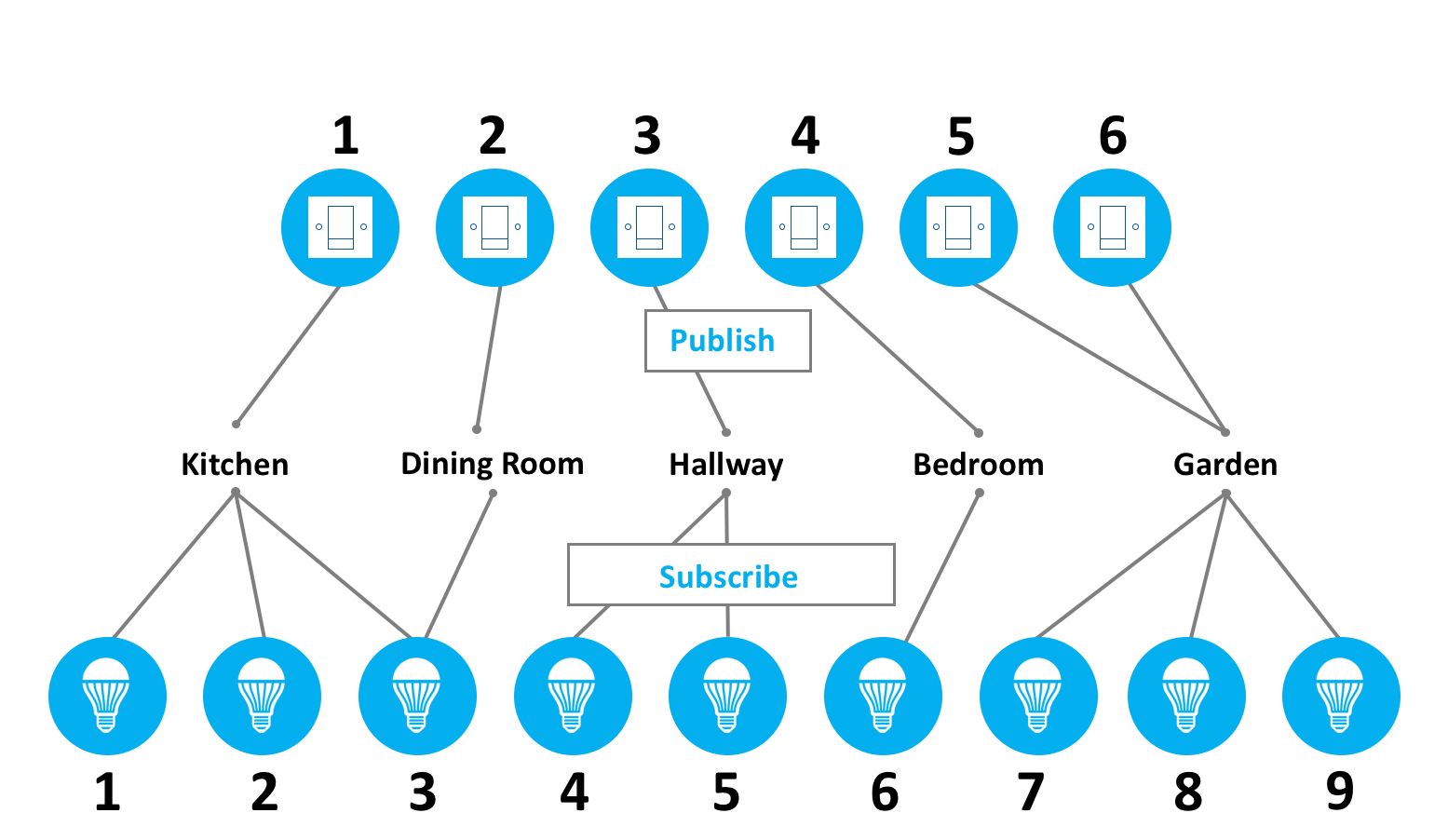 Nodes may subscribe to multiple addresses. An example of this is light #3 in the above figure, which is subscribed to both the kitchen and the dining room group addresses. Also, multiple nodes may publish to the same address, such as switches #5 and #6 in this example. These two switches control the same group of lights,  located in the garden.

The benefit of using group or virtual addresses is that adding or removing nodes does not require reconfiguration of nodes.

Many mesh networks use routing mechanisms to relay messages across the network. The other extreme is to flood the network with the messages being relayed without consideration of the optimal routes these messages need to take to reach their perspective destinations. Bluetooth mesh uses a technique that’s a compromise of both of these techniques. This technique is referred to as managed flooding.

Managed flooding relies on broadcasting messages to all nodes within range of the sender node, with a few added optimizations:

There are several other types of nodes in a mesh network which we’ll be covering in a later post.

In this post, we covered the basics and some of the most important terminologies in Bluetooth mesh. In the upcoming posts within this series, we’ll be covering more aspects of Bluetooth mesh including:

In addition, later on, we’ll get into some of the practical aspects of Bluetooth mesh and how to implement it for the Nordic nRF52 platform.