This week’s blog post will be a bit different. I’ll be covering a recap of the yearly event that covers all things Bluetooth: Bluetooth World in Santa Clara, California. Bluetooth World took place last week on September 18th and 19th. If you’re subscribed to my weekly BLE newsletter, you probably noticed that most of the BLE news last week were announcements from Bluetooth World. In case you missed the event, or even if you’ve attended, I hope you’ll find this post useful.

A New Trend for Bluetooth World

There are two main Bluetooth events, one that occurs in the US (called Bluetooth World) and the other in Asia (called Bluetooth Asia). This year, the Bluetooth SIG decided to change the dates for the US event and make it in September instead of March (Bluetooth Asia now takes place in March instead). Last year, the main focus of Bluetooth World (March 2017) was on the new Bluetooth 5 standard and the features that were introduced in this version. This year, however, the event was heavily influenced by the latest release of the new Bluetooth mesh standard.

As you can see, many of the sessions focused on Bluetooth mesh.

Another important thing to mention is that Bluetooth World has become much more focused on developers in the past couple of years (which, in my opinion, is a great direction taken by the Bluetooth SIG!).

Things to Keep in Mind Regarding Bluetooth Mesh

Bluetooth mesh is a very exciting new standard in the world of Bluetooth and the IoT (Internet of Things). However, it is still very early to tell whether it will be successful or not in achieving its (ambitious) goals. Some of the limitations and points to keep in mind are:

As you can tell, it is very early on in the adoption of this standard and will probably require a lot more work for both mobile and embedded developers to successfully implement and launch a Bluetooth mesh compatible product. This doesn’t mean that should ignore the standard. In fact, now is probably the perfect time to get started with learning the standard and getting ahead of the curve and ahead of your competition.

The 20th Anniversary of Bluetooth

As you may know, Bluetooth turned 20 this year, which was also celebrated at the event. To celebrate the anniversary, one of the keynote sessions hosted a special panel of prominent figures within the Bluetooth community, which included the “fathers of Bluetooth”. They discussed topics such as the origins of the technology, the story behind the naming, and how they see the technology evolving in the coming years.

The panel included the following people: 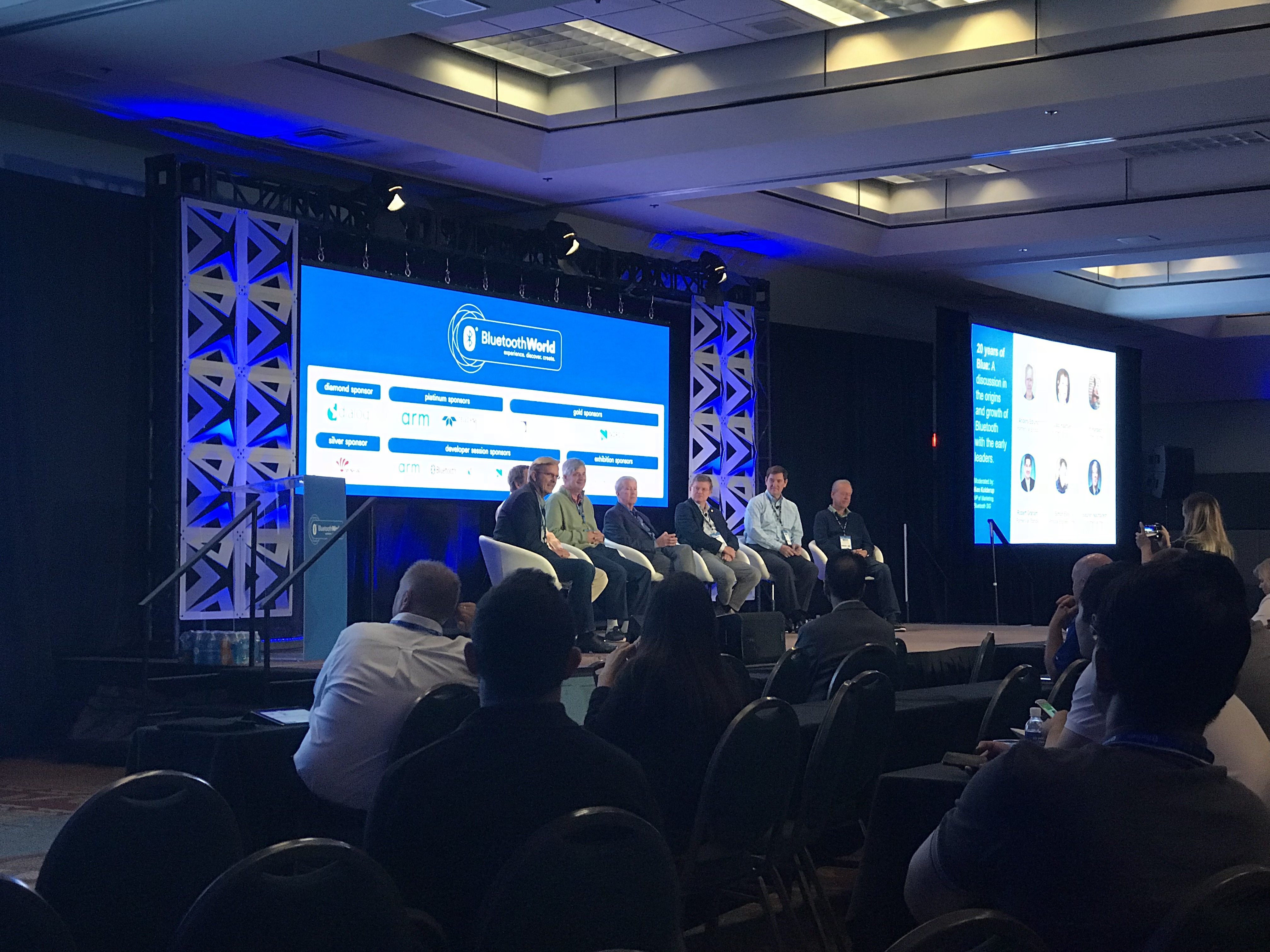 One of the cool seminars at the event was a talk given by Justin Bautista, Wearable Electronics Application & Research Lead – NASA Johnson Space Center. He talked about how NASA is utilizing Bluetooth for connecting with a carbon dioxide sensor that gets mounted on the back of astronauts in space. He also talked about their current efforts for developing their own version of a Bluetooth gateway that can connect to multiple sensors simultaneously. They are also looking at utilizing Bluetooth 5 for increasing the throughput of data transfers from the sensors.

Here are a few pictures showing the wearable developed by NASA: 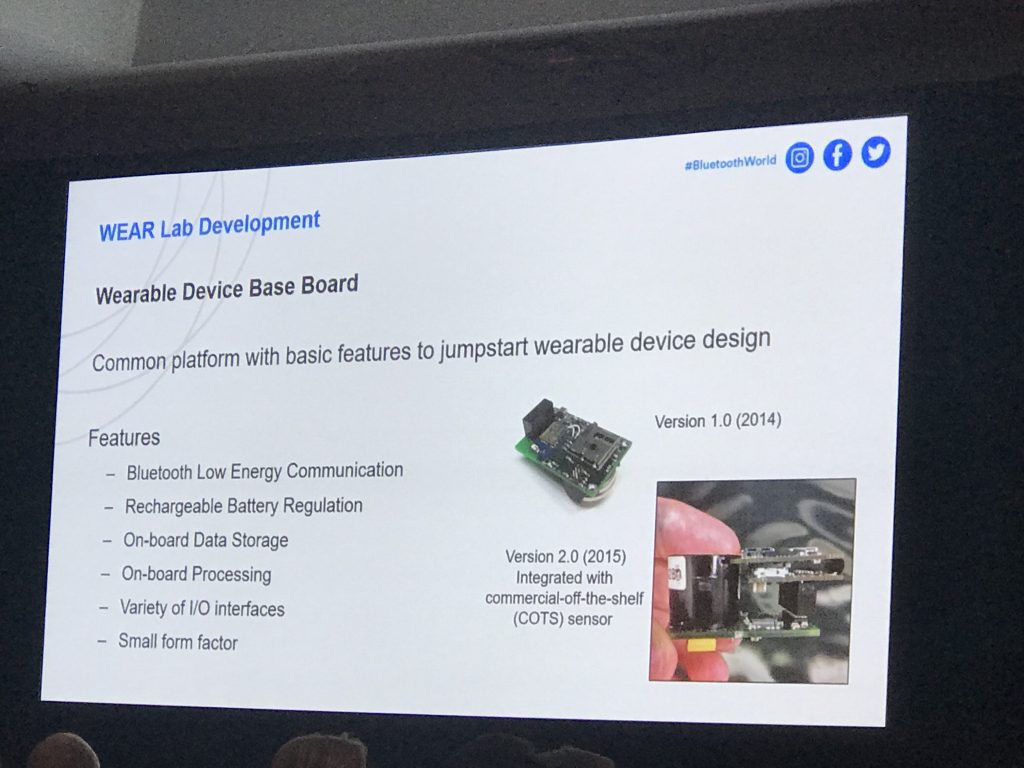 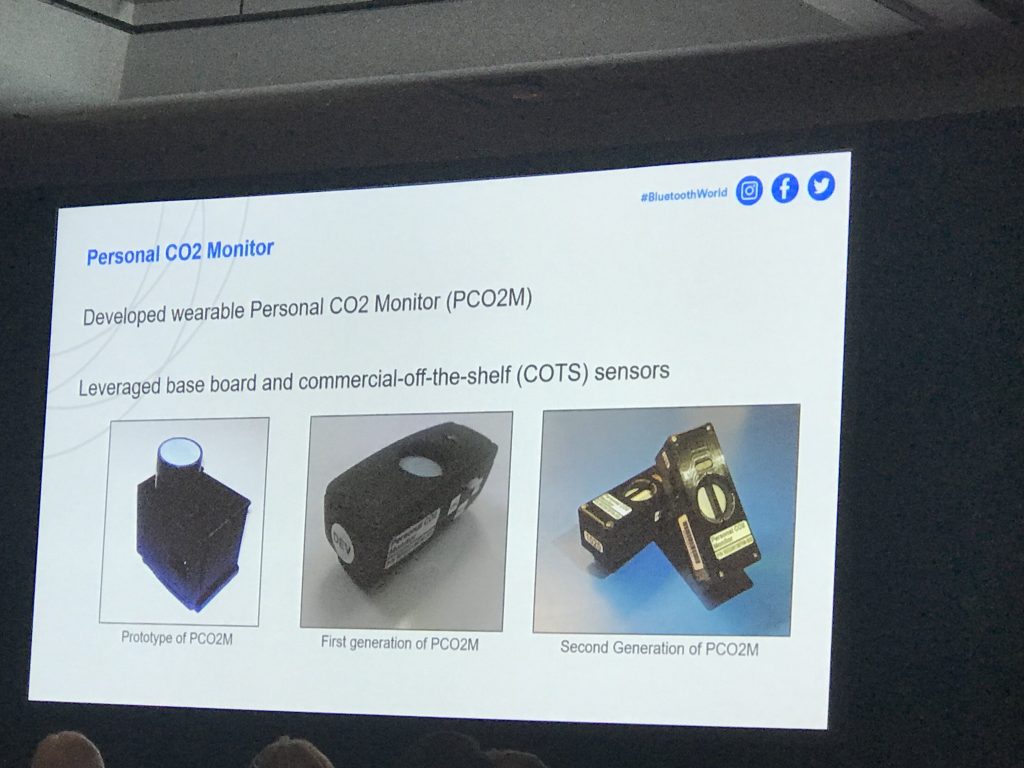 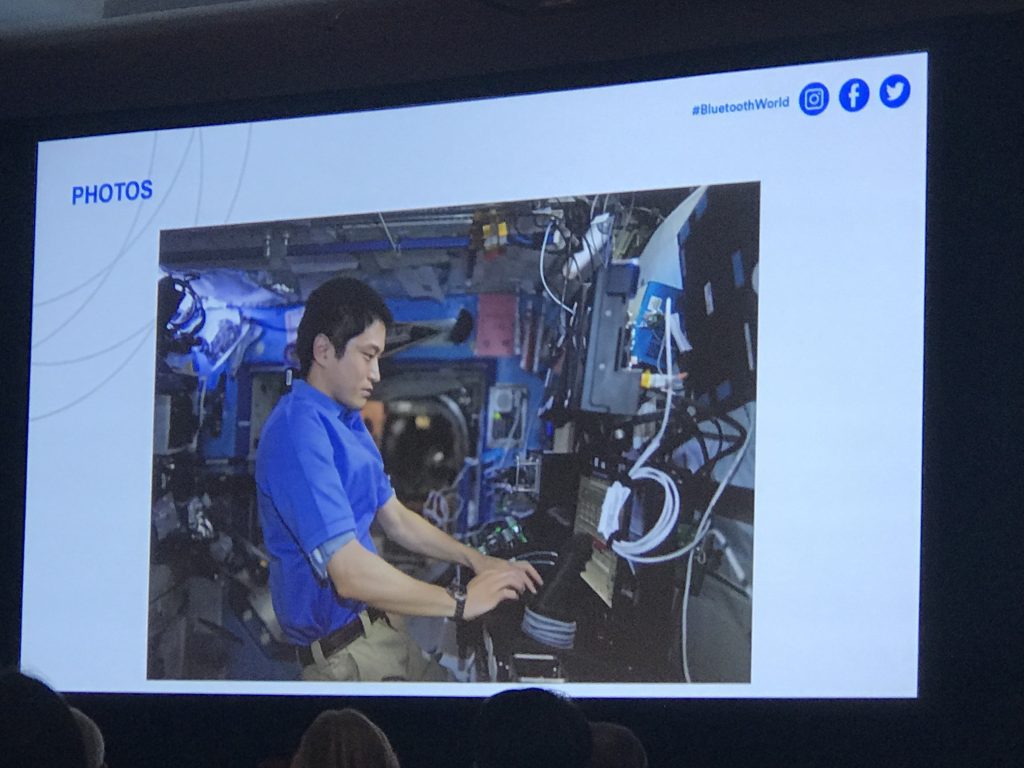 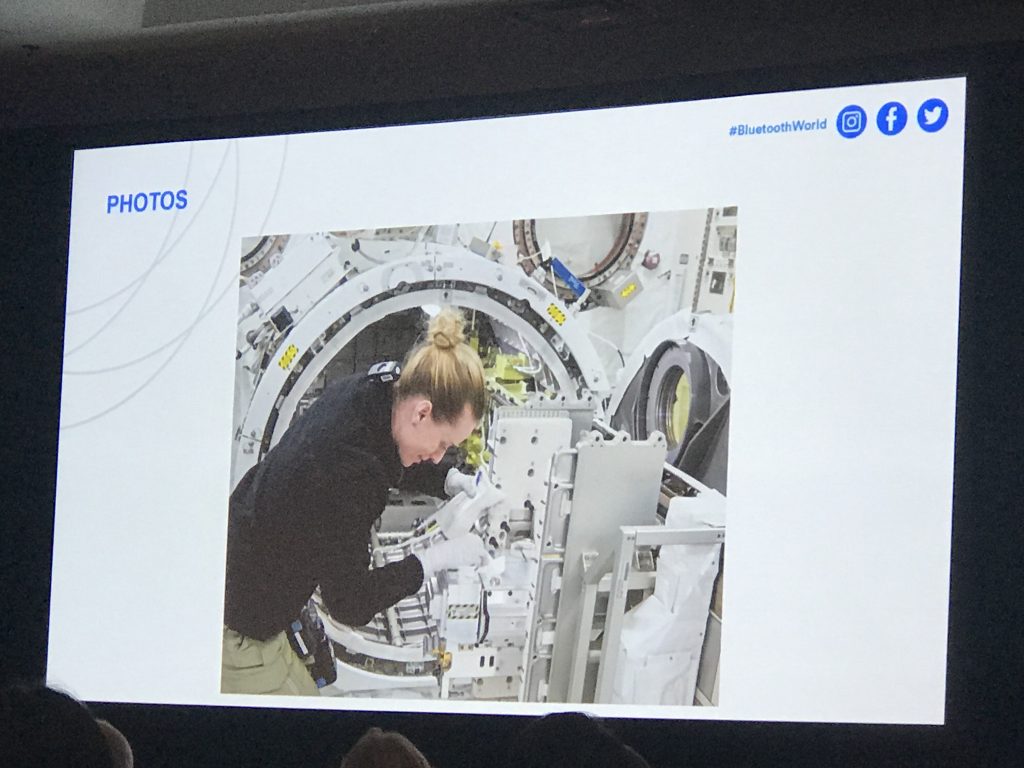 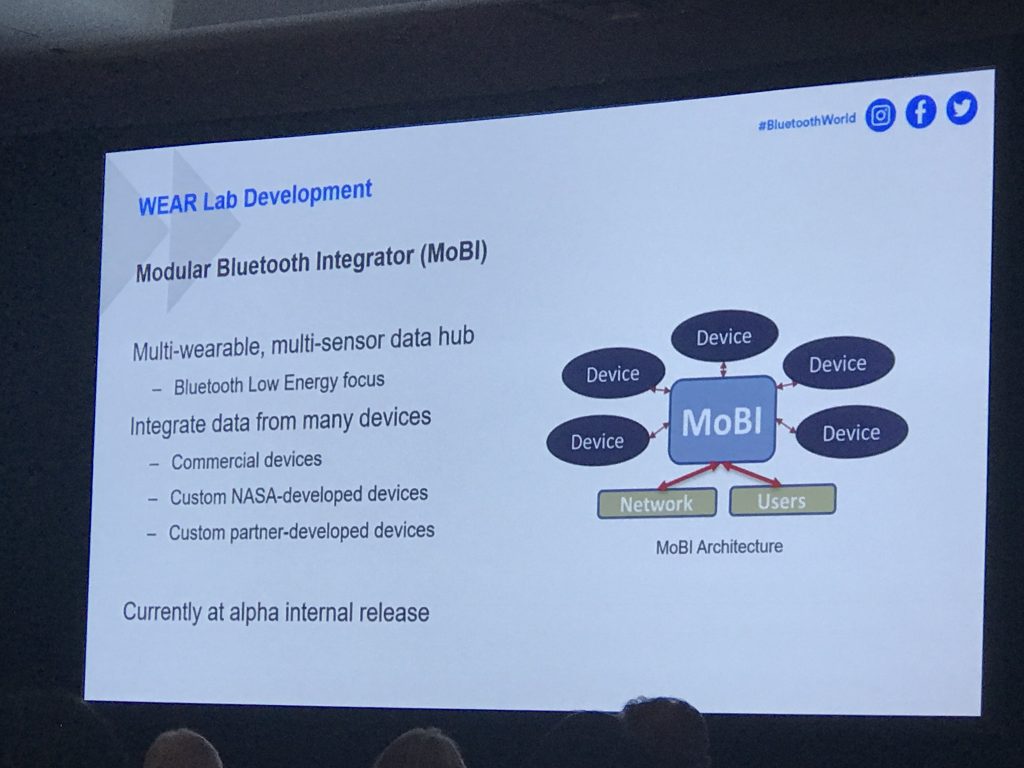 One “cool” product showcased at the show was a coffee printer machine that receives photos and can print them via edible ink on the foam surface of a coffee drink 🙂 Yes, it may be a silly application, but it does show how easy Bluetooth can make some task such as transferring a chunk of data (a photo in this case). Basically, the barista takes a photo using a smartphone app, and then transfers the photo to the machine, which then prints it on the surface of a coffee drink. Here are some pictures showing the process: 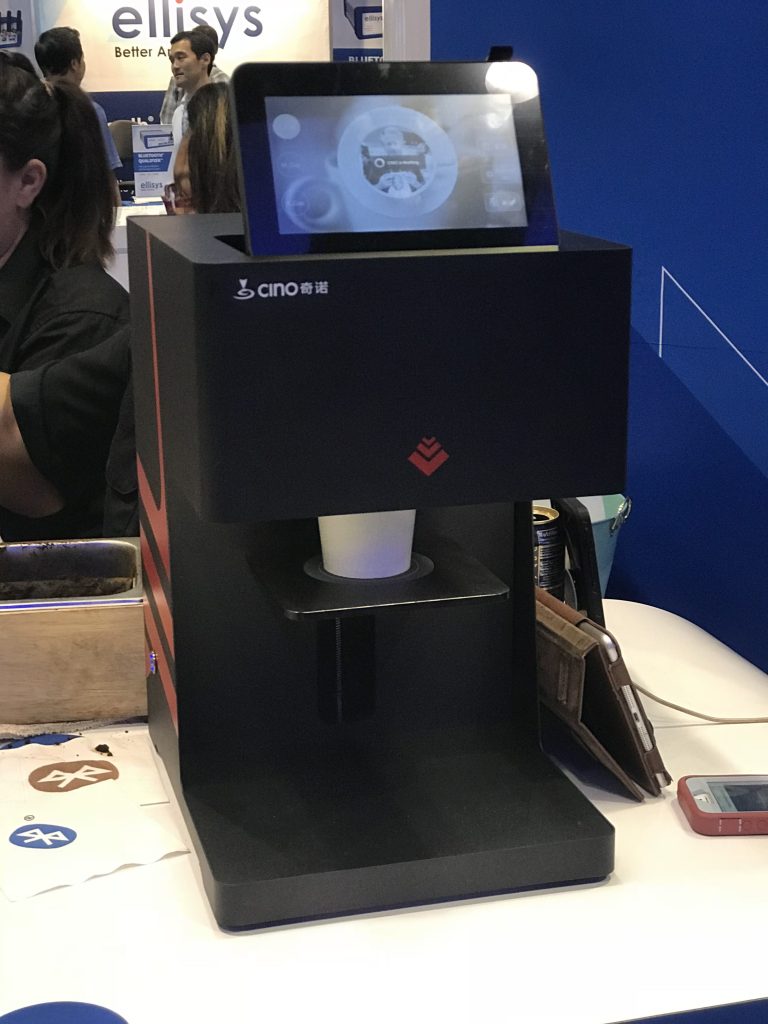 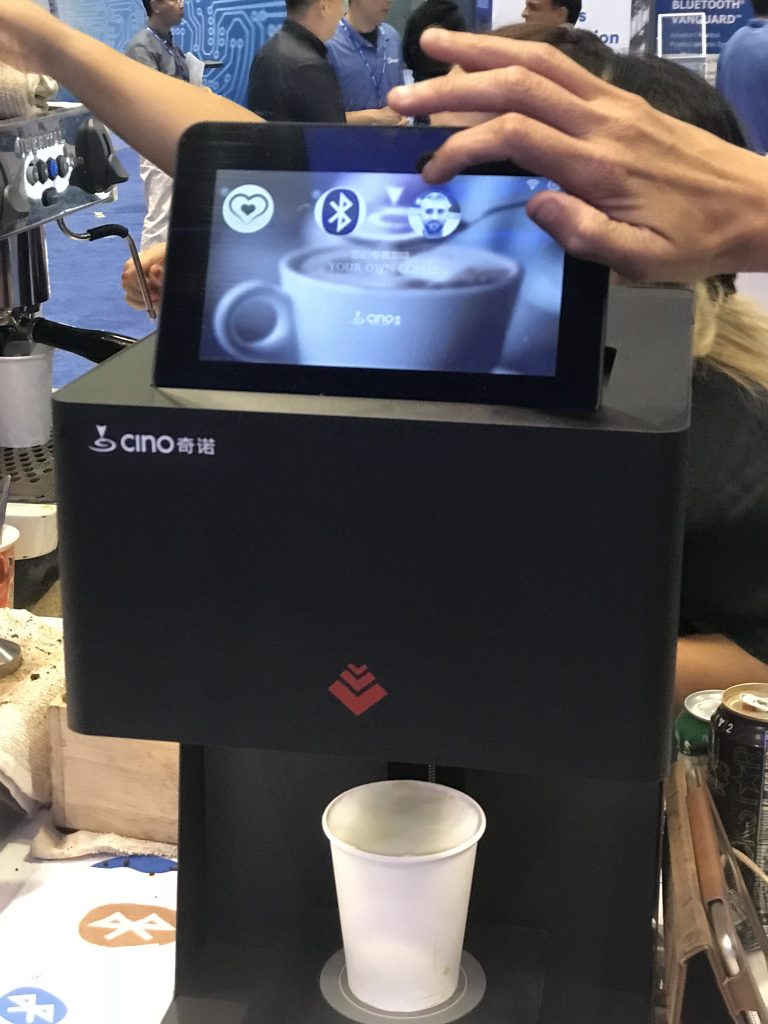 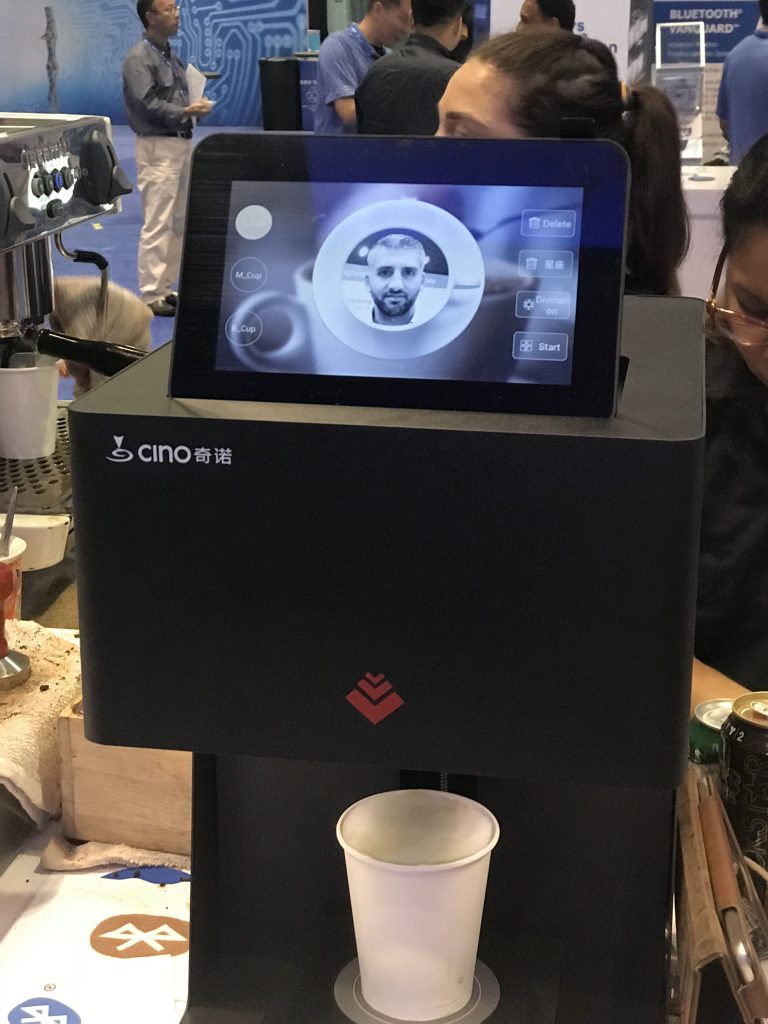 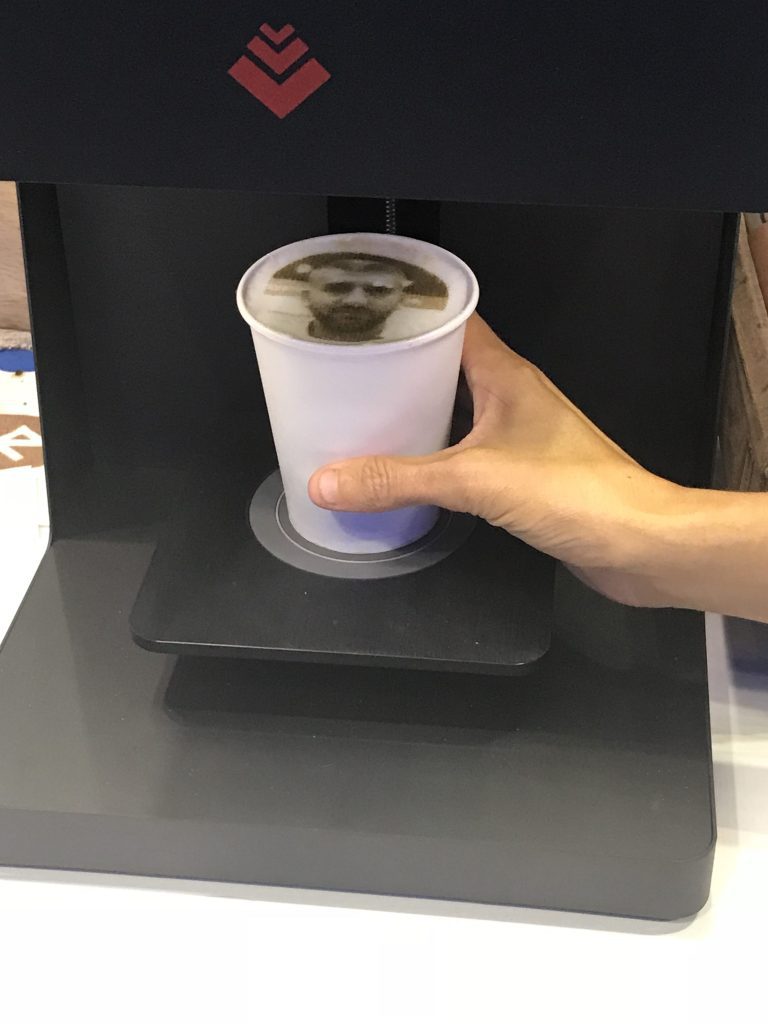 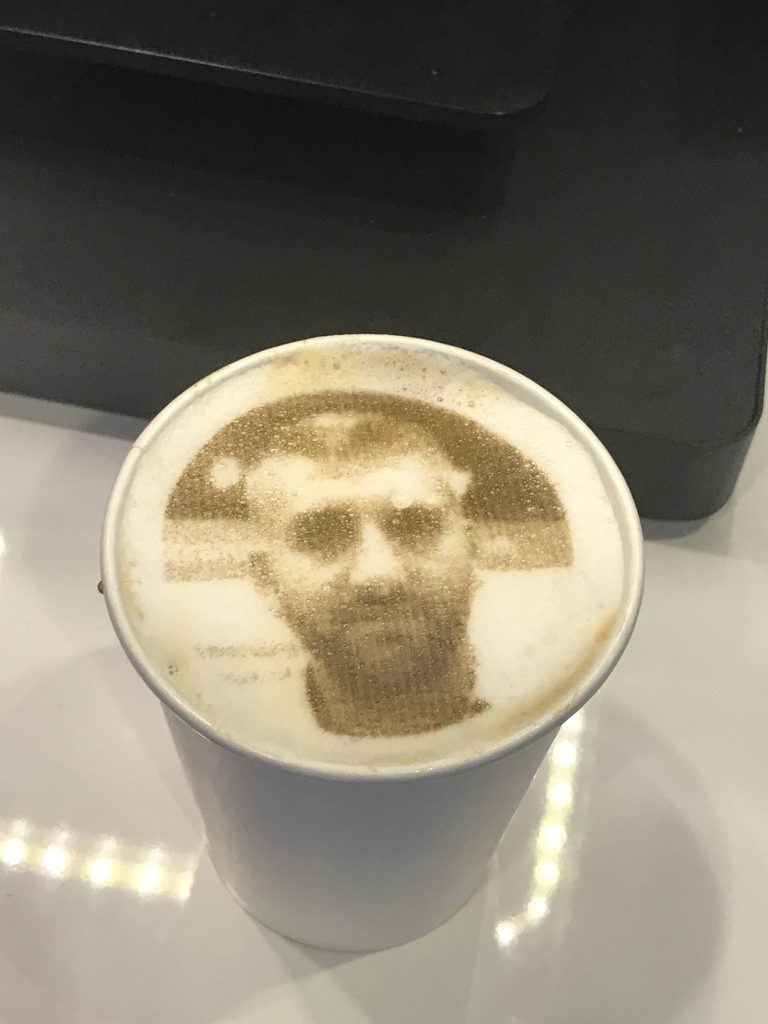 At one of the keynotes, ARM announced the open sourcing of a production-ready BLE stack. This can be compared to the Zephyr Project and the myNewt project. You can read more about the announcement here.

At the event, Ellisys also announced a new feature in their latest product, the Ellisys Vanguard Bluetooth Analyzer. The system employs three antennas, two of which are used for Bluetooth signal capture, and one for IEEE 802.15.4 traffic capture, and all three antennas used for capturing WiFi traffic. The idea behind the two distinct Bluetooth antennas is that you can extend each to be displaced from one another and capture the traffic from the proximity of two separate devices. Utilizing this method would allow you to place the two Bluetooth devices in positions that would reflect a real-life environment and still be able to capture all Bluetooth traffic from each device in a clean manner.

You can read more about the new announcement here.

The interest and demand for audio over BLE is increasing from companies working on audio products. This comes as a result of the direction the Bluetooth Working Groups are taking in introducing most of the innovations and improvements in the BLE standard instead of Bluetooth Classic. BLE chipsets are easier to develop on and provide much more flexibility than Bluetooth Classic chipsets. There is a lot of talk about the introduction of an audio-over-BLE standard, but so far it seems it still has a long way to go.

Dialog Semiconductor is taking this opportunity to be the first to showcase their own implementation of audio over BLE on a chipset. You can learn more about the announcement here.

Silicon Labs announced their release of new modules that allow developers and manufacturers to enable WiFi and Bluetooth connectivity without writing a single line of code. Basically, the solution acts as a serial interface to devices on each end, allowing data transfer of simple data points. As part of the offering, mobile app SDKs for both Android and iOS are provided to make the task of integrating these modules effortless.

You can read more about this announcement here.

To summarize, Bluetooth World is a very affordable event to attend (not including accommodations and travel costs). If you’re a developer looking to work, or already working, with Bluetooth technology, then this event is a great place to learn more about the technical aspects of the standard in addition to networking with other industry leaders and developers in the space.

Did you attend the event? If so, what did you think of it? Did it live up to your expectations? If you decided not to attend, then why is that so? Let me know in the comments section below.

Before closing, I’ll leave you with a few pictures I took at the event. Enjoy, and don’t forget to subscribe to my newsletter to get notified of the latest in BLE and get informed when the next blog post gets published. 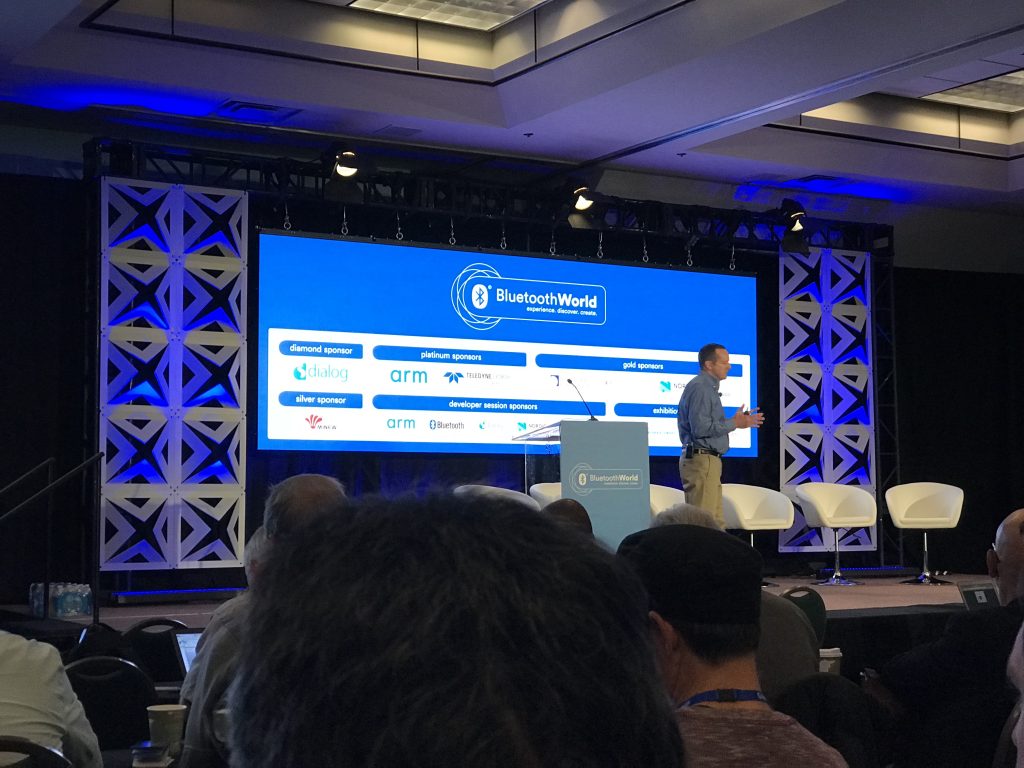 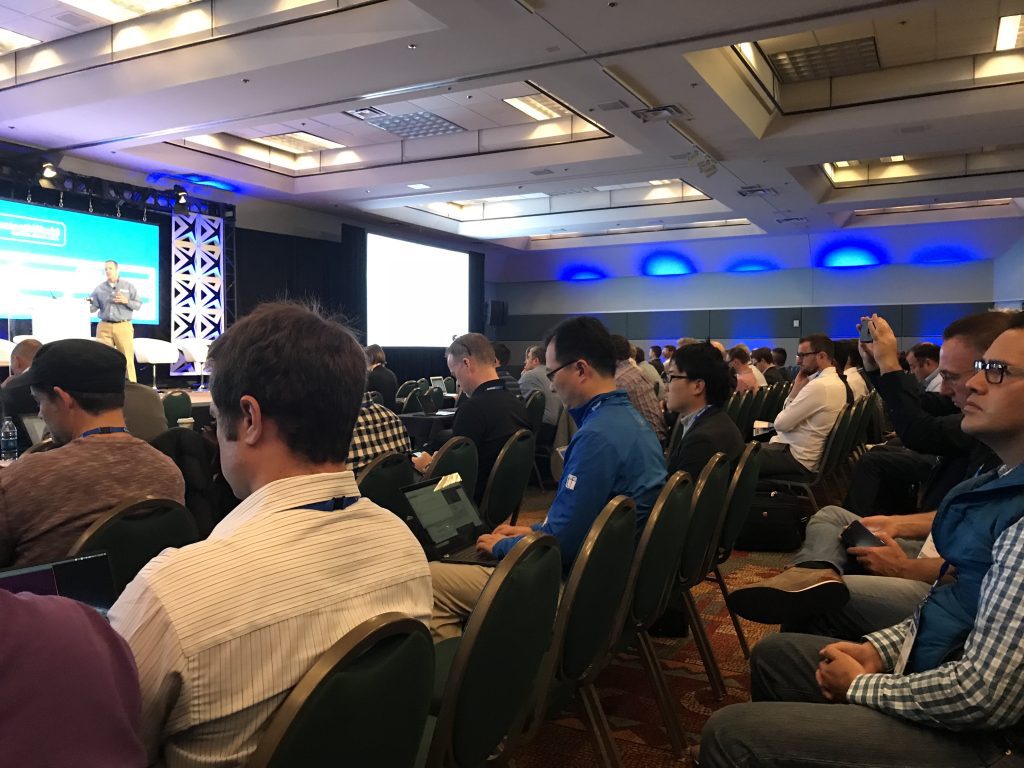 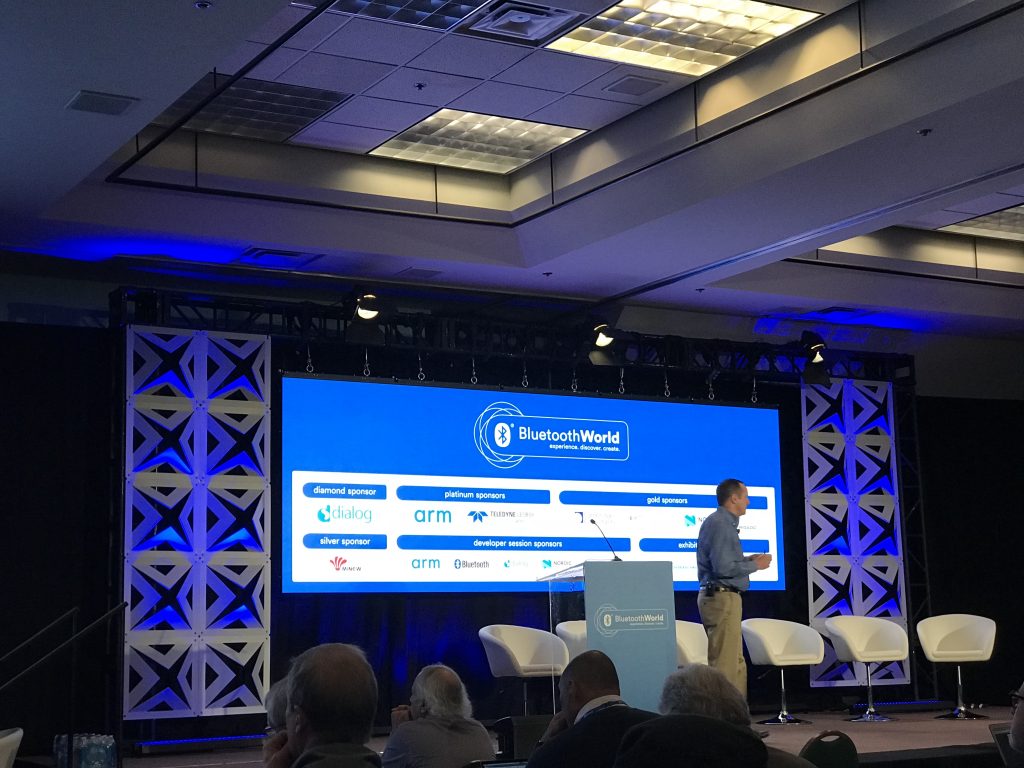 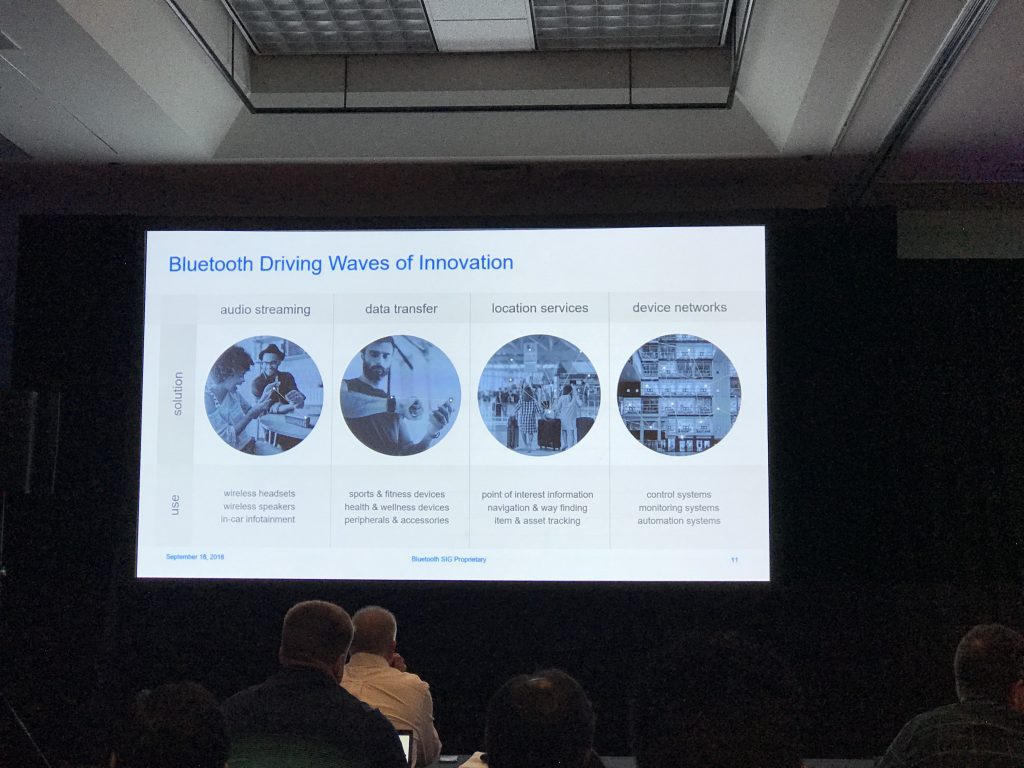 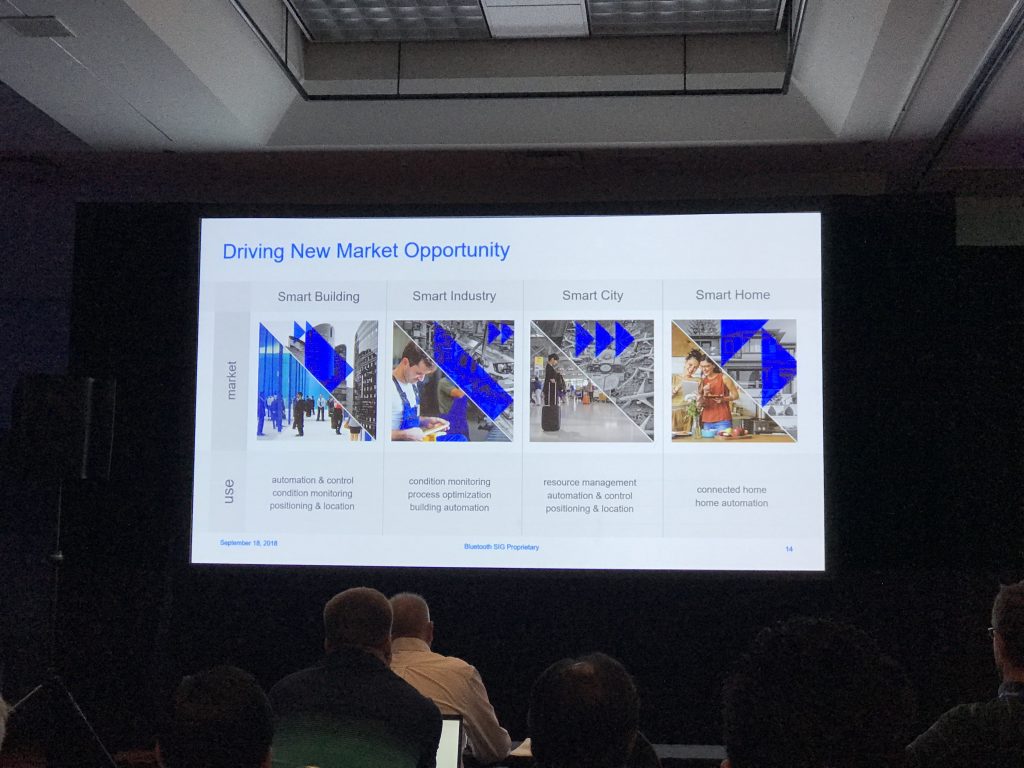 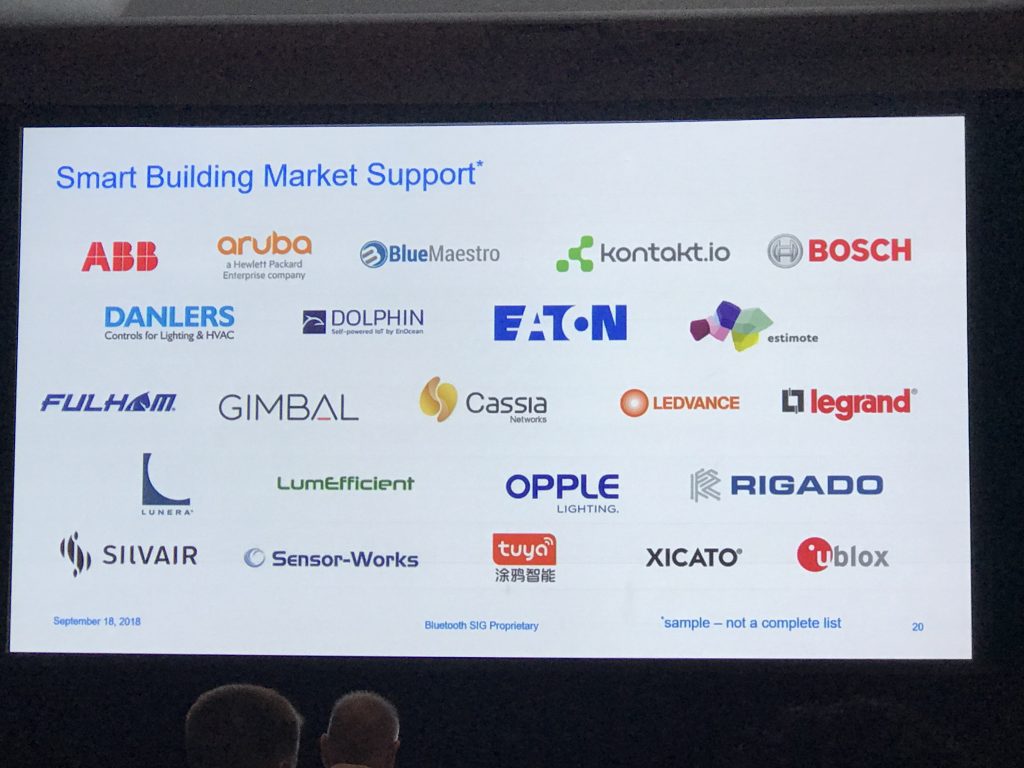 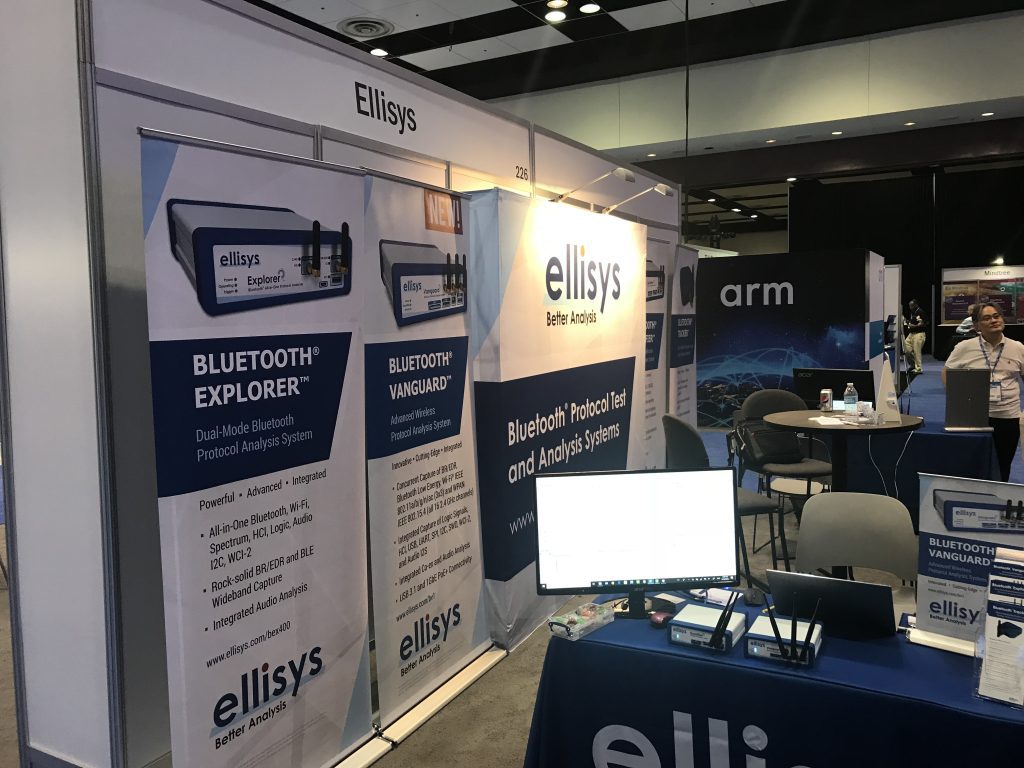 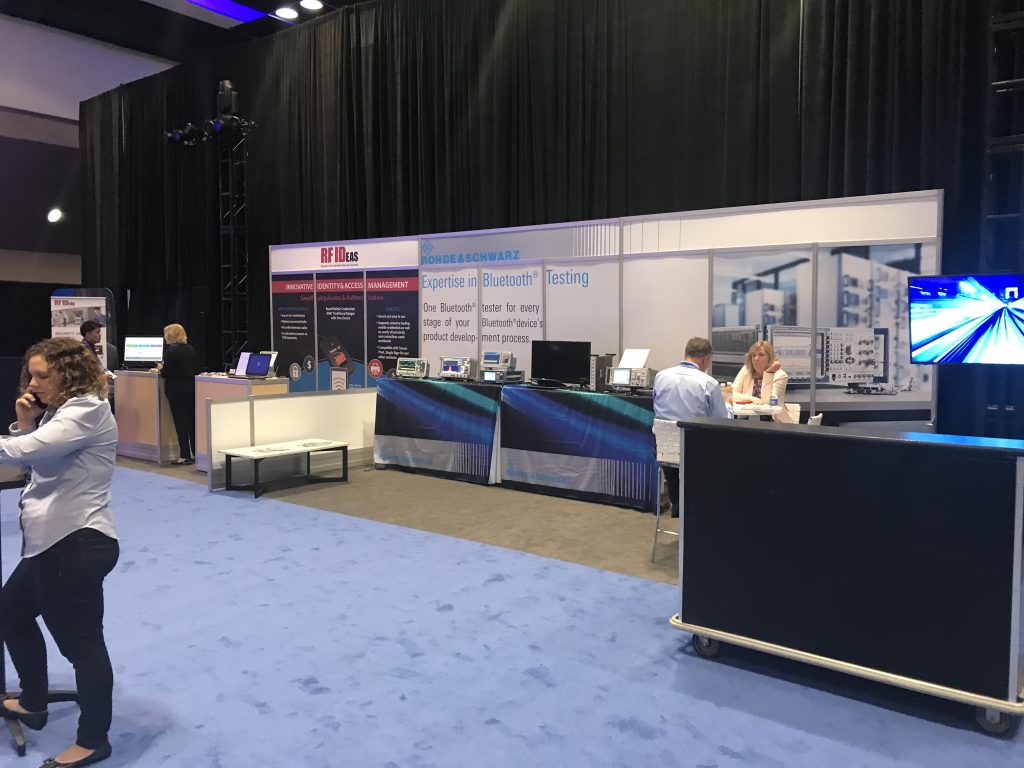 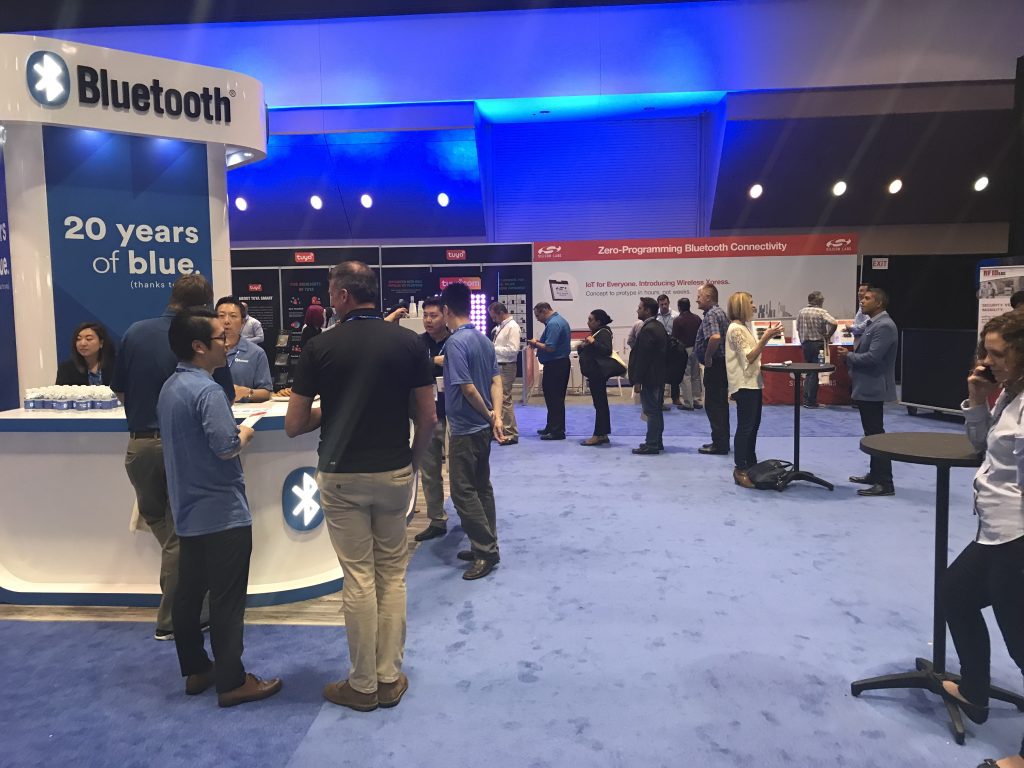 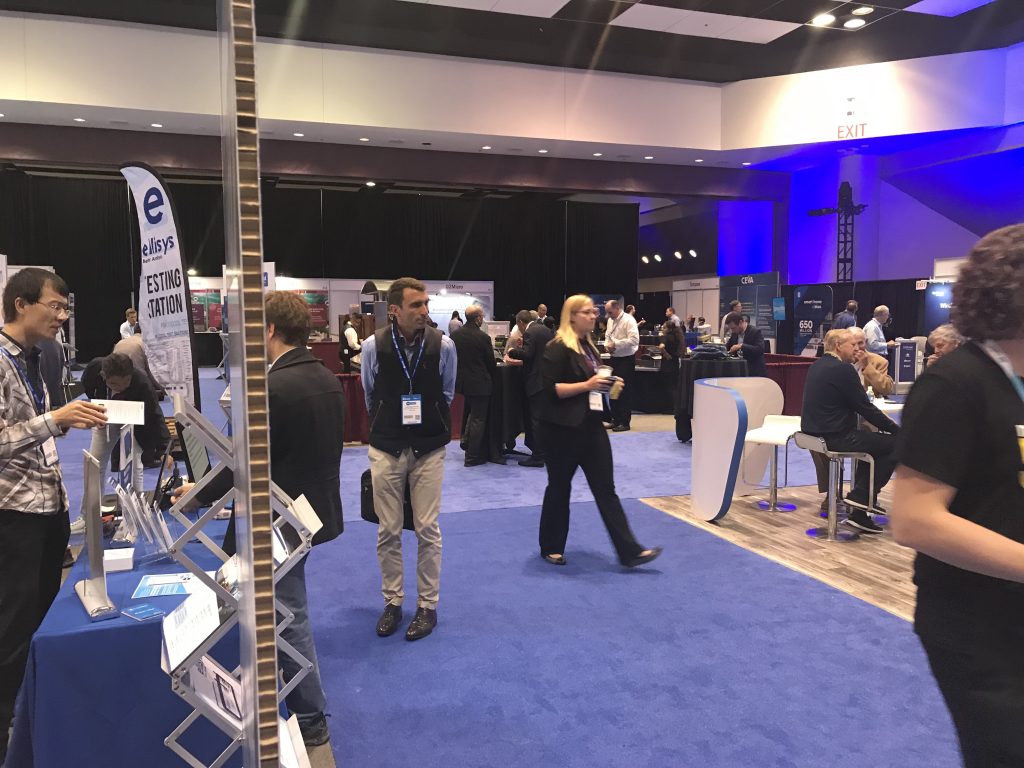 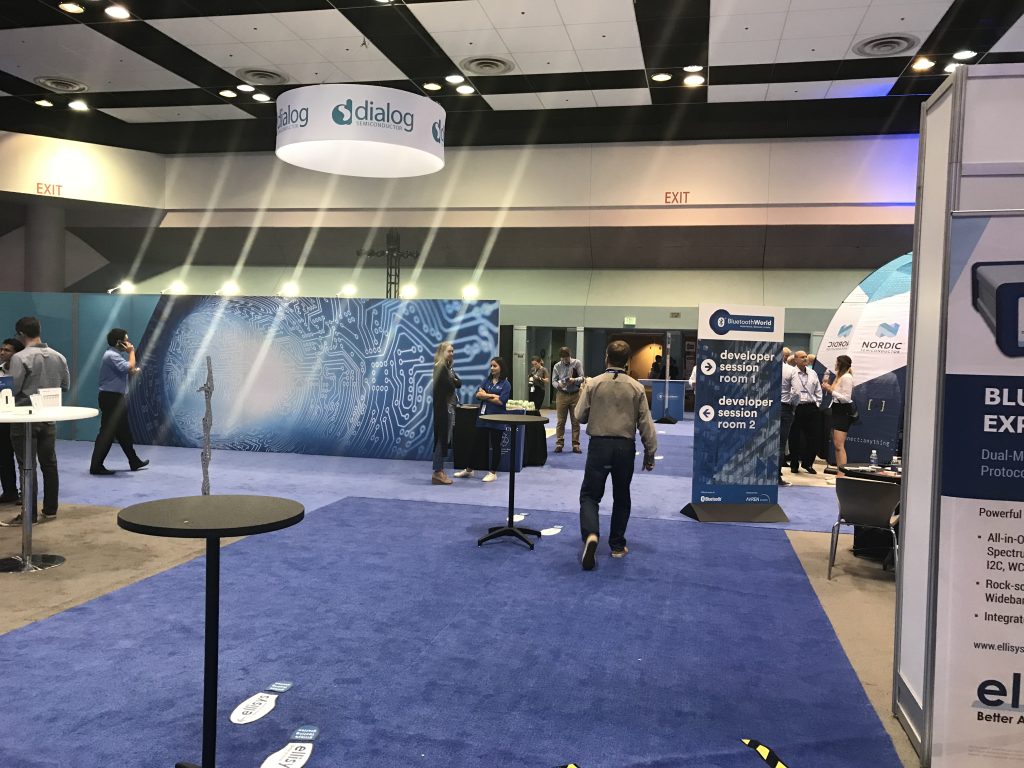 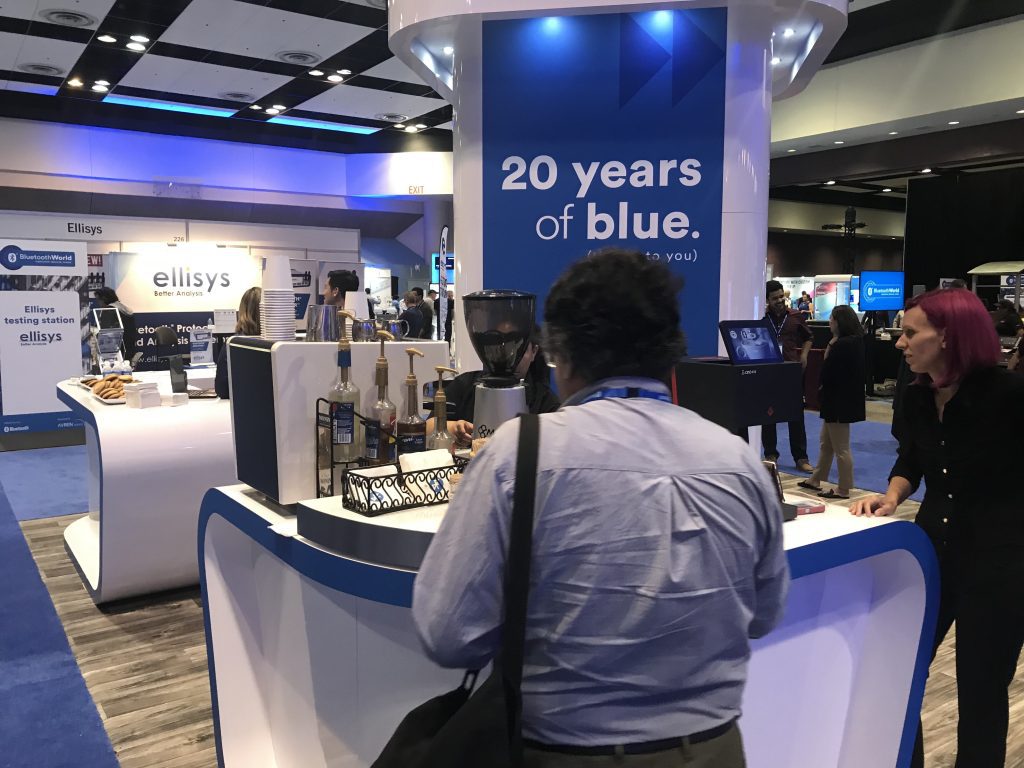 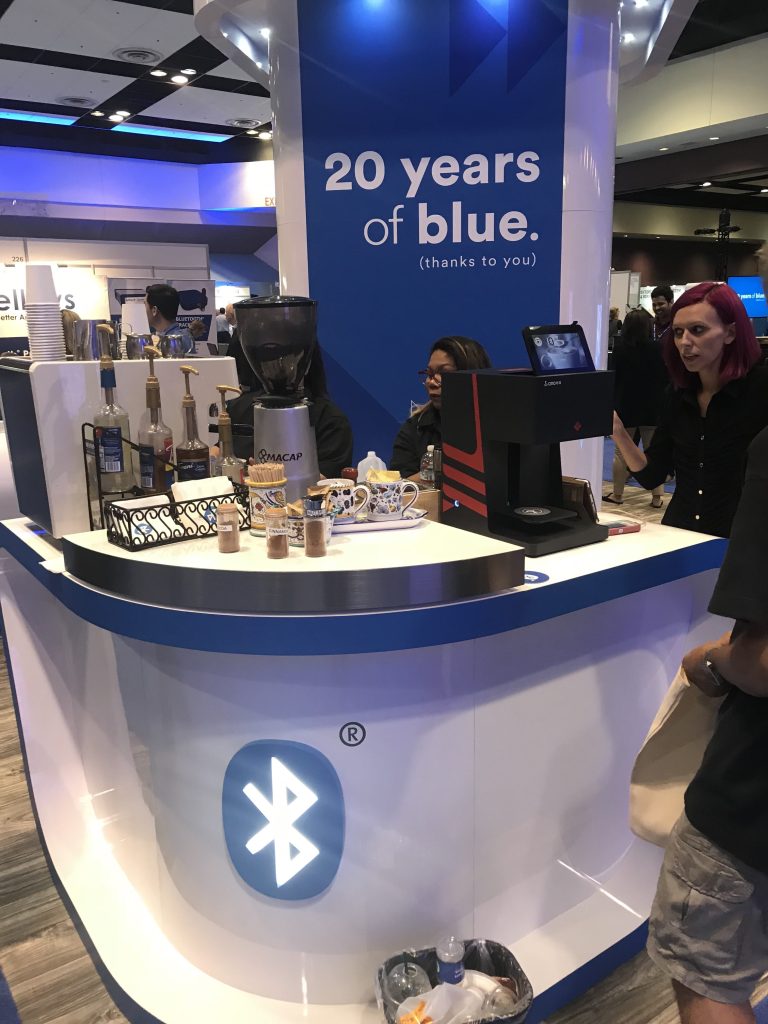 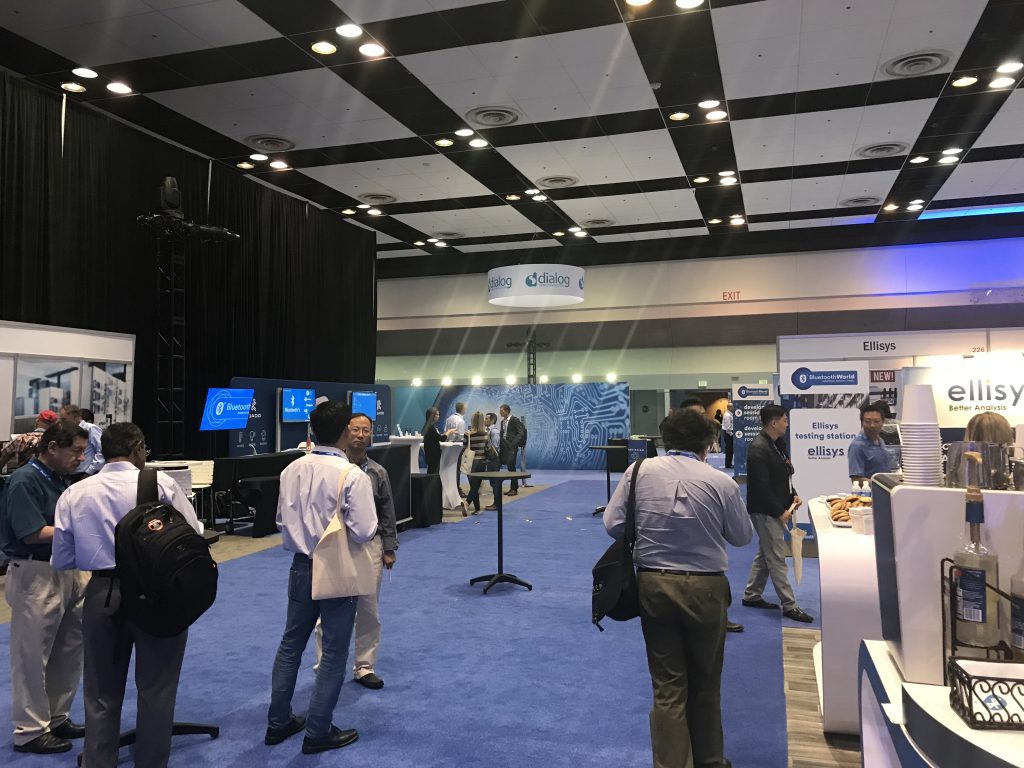 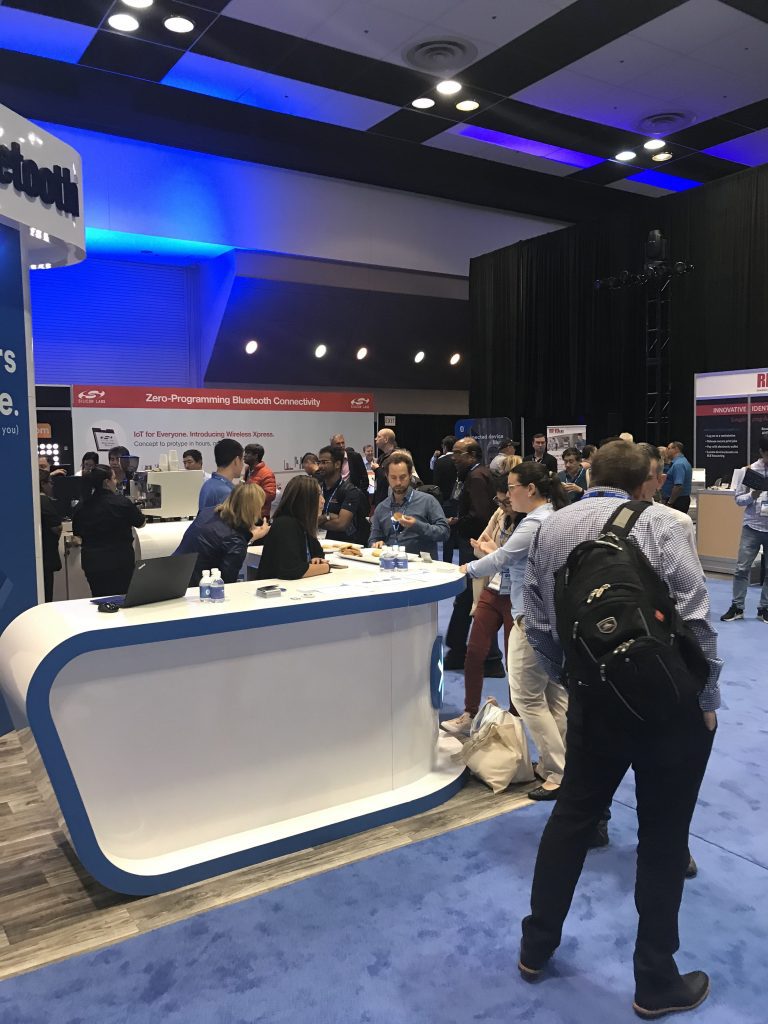 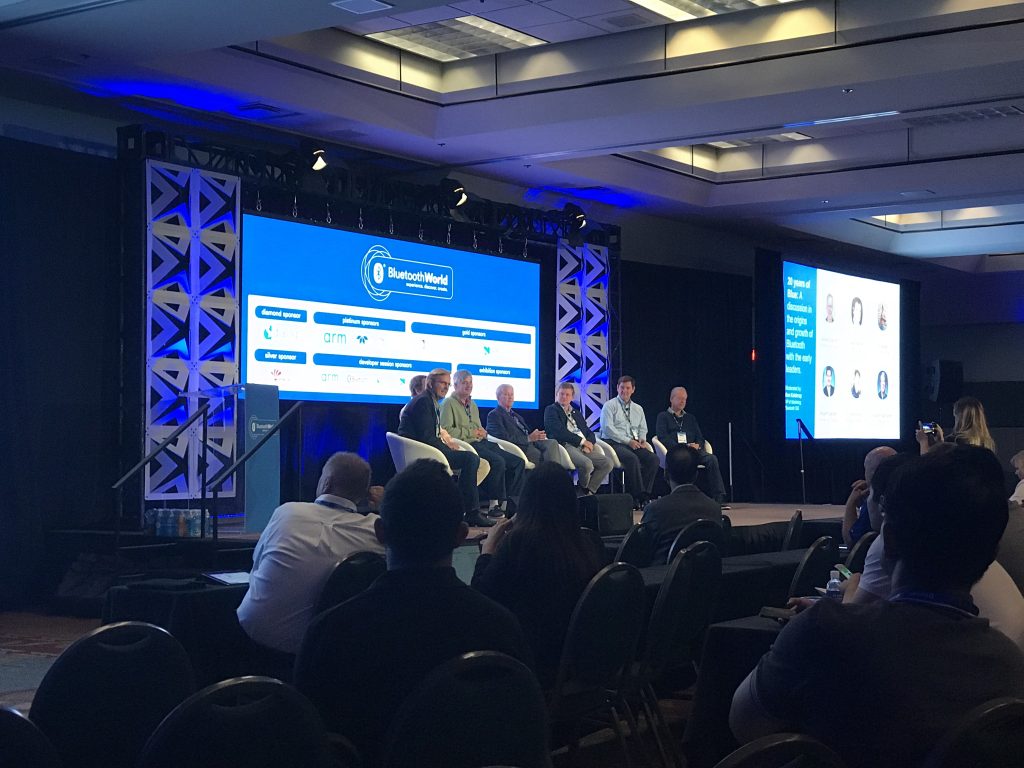 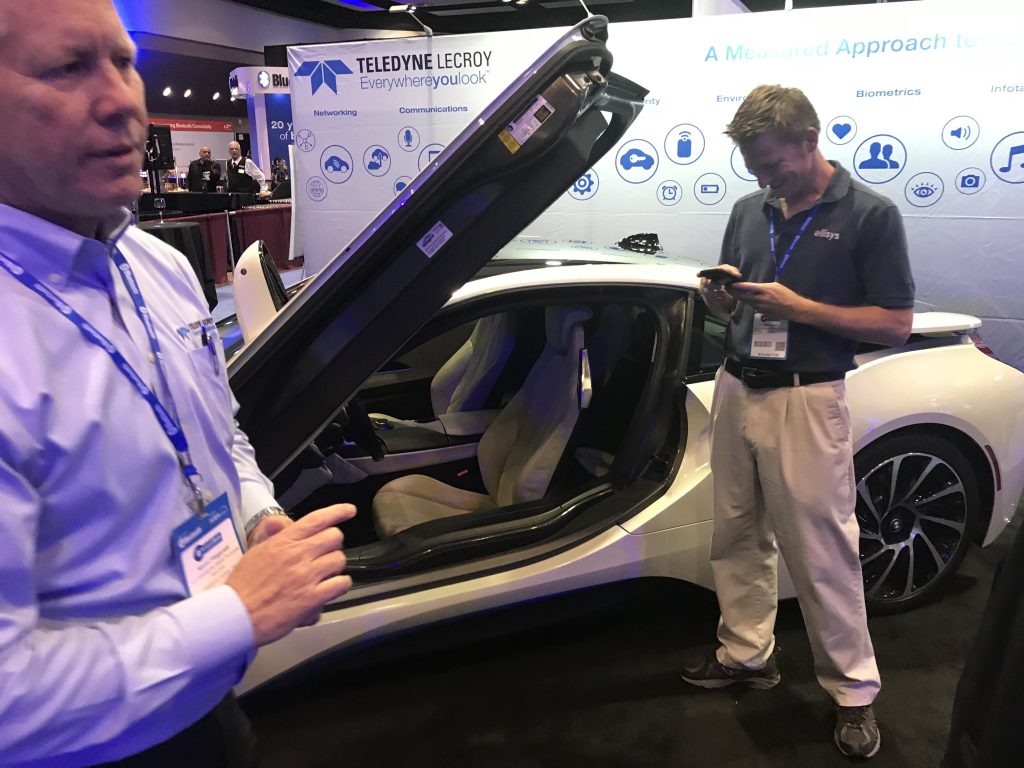 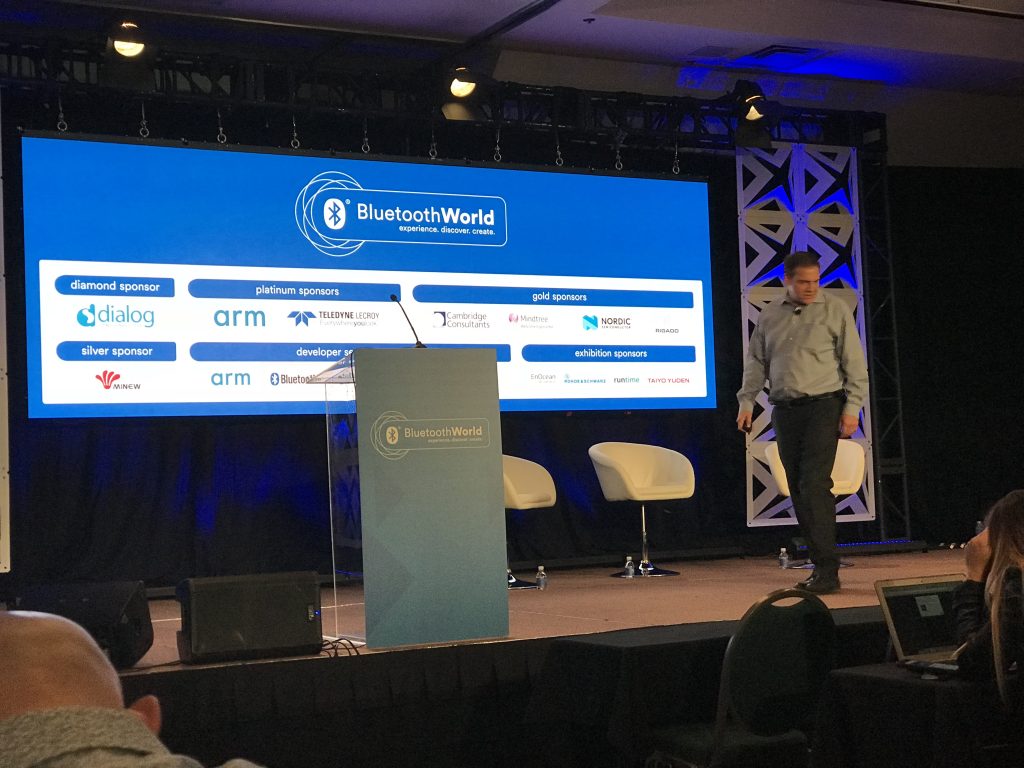